SPRING WORKSHOPS ARE BACK!

All workshops will be held from 12:30 - 2:30pm at the Annex (15 N. Broadway, second floor). Workshops are FREE for Teen & Youth Repertory dancers, and cost $20 for all other dancers. Workshops will only run with a minimum of pre-registered dancers. Interested dancers are encouraged to sign up ahead of time at dance@rivertowndanceacademy.org. 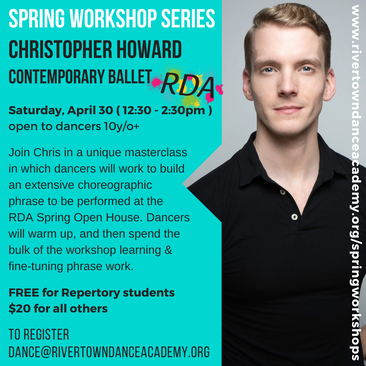 Join Chris in a unique masterclass in which dancers will work to build an extensive choreographic phrase to be performed at the RDA Spring Open House. Dancers will warm up, and then spend the bulk of the workshop learning & fine-tuning phrase work.

​Biography
​Most recently Christopher completed his fourth US tour with the Broadway show “Anastasia” as Dance Captain and male swing. Previously spending two years on the road with the 1st National Tour of “An American In Paris” as Resident Dance Supervisor, Dance Captain, and Fight Captain, Christopher is now a freelance artist, teacher, and group fitness instructor. He has also traveled with “The Phantom of the Opera” (Assistant Dance Captain, Swing), “Billy Elliot” (Older Billy), and “A Chorus Line” (Larry) as well as dancing for Dayton Ballet and performing with Celebrity Cruise Lines. Regionally, Christopher has worked at Capital Repertory Theatre in “The Full Monty” (Keno, Dance Captain) and Paper Mill Playhouse in their recent production of “Cinderella” (Dance Captain). He has also had extensive teaching experience at numerous accredited dance schools, universities, and companies nationwide. He has taught six years for Broadway Connection, was twice invited to be an instructor for Playhouse Square’s Broadway Summer Camp in Cleveland, Ohio, and has been a guest artist for USC’s Kaufman School of Dance, Wright State University, the Dayton Ballet Academy, University at Buffalo, and the Greater Lansing Ballet Company, among many others. Christopher’s training includes a BFA in Music Theatre and a BA in Dance from SUNY Buffalo and he was a scholarship student to the world-renowned Joffrey Ballet School in New York City. 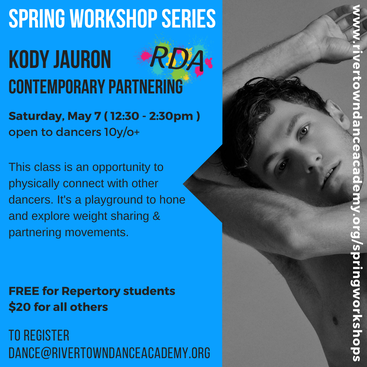 CONTEMPORARY PARTNERING with KODY JAURON
Saturday, May 7
​
This class is an opportunity to physically connect with other dancers. It's a playground to hone and explore weight sharing & partnering movements.
​
​Biography
​Kody Jauron is a passionate performer and choreographer currently freelancing in NYC. Originally from Phoenix, AZ, he began his performance career on the ice as a competitive figure skater and an actor. After discovering and falling in love with dance, Kody dove head first into his training. Kody has danced professionally with Ballet Austin, DanceWorks Chicago, and NW Dance Project and has worked to develop new works with many different choreographic voices including Yin Yue, Gabrielle Lamb, Ihsan Rustem, Cayetano Soto, and Felix Landerer.

​With an extensive background in classical Theater Jazz styles such Jack Cole and Fosse, Camden explores these historical influences through a contemporary lens and helps dancers connect to style and technique as humans, using breath, somatic sensation, and expression.
​
Biography
Camden received his BFA in Dance from NYU Tisch before joining the National Tour of the Broadway Revival of Pippin. Since, Camden has helped to remount the show as Associate Choreographer in Japan and Australia. Camden has also served as Tour Choreographer for Finding Neverland, Assistant Tour Choreographer for Chicago, has traveled internationally alongside Chet Walker(Pippin, Fosse) to help teach the Jack Cole technique, and is currently the Assistant Choreographer for the new upcoming production of Jack Cole the Musical.

SALSA PARTNERING with ADRIANA DWYER
Saturday, May 21
* joining with a designated partner is recommended; dancers who attend without a designated partner will be partnered up with other solo students
​
Not to be confused with what you eat with chips, “Salsa” is a complex genre that is unique in combining the dance worlds of European, Indigenous, and African cultures. With over 15 ​years of experience, Adriana will guide students through a melting pot of body movements, techniques, and ultimately partnership skills that come together to create this ever-so-popular partner dance AND music known as "Salsa"

Biography
As a young girl, Adriana explored and bounced around the jazz, modern, and hip hop dance worlds. After high school, she spent 8 years - while studying for her degree in Education - traveling with her mentor/dance partner to various Salsa Congresses around the US teaching workshops and performing various Caribbean dance styles like Mambo, Cha Cha, and other Afro-Cuban Rhythms. One of their main specialties was teaching Musicality of “Salsa” music.

In 2015 she packed up and moved to New York to begin teaching and training professionally in Ballroom dance. She taught a range of students; from those who never danced before to students with a drive to improve through competition and showcase routines. In the Fall of 2021, she and her professional dance partner (also her husband) opened their own Fred Astaire Dance Studio in North Raleigh, NC. 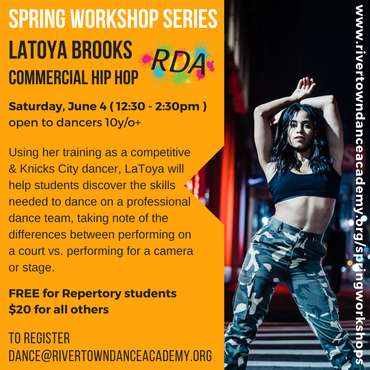 COMMERCIAL HIP HOP with LATOYA BROOKS
Saturday, June 4
​
Using her training as a competitive & Knicks City dancer, LaToya will help students discover the skills needed to dance on a professional dance team, taking note of the differences between performing on a court vs. performing for a camera or stage.

Biography
LaToya has been dancing for over 20 years.  Originally from Utica, NY, she is trained in various dance techniques and grew up as a competitive dancer.  She is a graduate from Manhattanville College in Purchase, NY with a Bachelor’s degree in Communications and Dance & Theatre.  During her college career she had the opportunity to work with guest choreographers such as Darrah Carr, Earl Frederick Mosley and Ronald K. Brown from the Alvin Ailey Dance Theatre.
​
LaToya's professional credits include: Motion picture TRAINWRECK 2015, Saturday Night Live, Knicks City Dancer 2009-2015; being captain for the last two, Assistant Coach of the Knicks City Kids, Coach of the Timeless Torches dance team for the WNBA Liberty, NBA All-Star basketball games in Los Angeles, Orlando, New Orleans and New York, Pre-Olympic Tour held in Manchester, England 2012. LaToya has danced with artists Rihanna, Lenny Kravitz, Flo Rida, Pitbull, Ne-yo, Jason Derulo, Labyrinth, Natasha Mosley, Vanilla Ice and Mack Wilds. She has had the opportunity to dance in various countries including Italy, France, Spain, Germany and China.
Take a look at last year's Spring Workshop Series (2021, below)